“The Pearl of Africa”, that’s the words Winston Churchill used to describe Uganda. I have not visited any other African countries yet so I can’t say if he was right but I sure have enjoyed what I’ve seen so far. I’ve been here for a month and a half now and I stood face to face with Mountain Gorillas, tracked Chimpanzees, seen many different savannah animals and primates, climbed a volcano and stood on the border of Rwanda, Congo and Uganda and much more. And above all, I have experienced the Uganda people and culture. 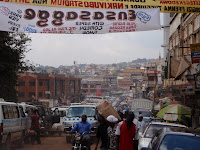 Uganda lies just on the equator and almost the whole country has an altitude of over 1000 metres which makes it such and extremely fertile country, everything is green and flourishing and the sun seem to shine every day with a temperature around 25-30 degrees during the days all year around and around 15-20 during the nights in most parts of the country. So even though Uganda might be a poor country (although doing quite well in African standards) there is no shortage of food. The big problems here are instead the healthcare and education which is not very developed and not accessible to everyone. For example we came by a Boda-Boda accident where a small girl got her foot inside the wheel of the bike, so we carried her into our car and drove her to the local hospital only to find there was no doctor in at the moment, and they weren’t sure if he would show up at all during the day.

Then people here also tend to have a lot of children, about 7 on average, add then that you have to pay for your children to go to school and if you are a poor farmer (90% of the working population is involved in agricultural work) you cant really afford for all your children to go which means about only 38% of the population finish primary school and less then 15% enrol to secondary school. Then add to this that only 4% of the population has access to electricity, about 45% to safe drinking water and quite a harsh historical past especially with recent leaders like Obote and the infamous Idi Amin and you can see that there is and have been some obvious problems for the people of Uganda. 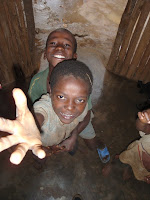 But still, I reckon a lot of people here live happier lives then a lot of people do in the western countries. You see kids playing everywhere and people laughing. In the evenings people sit outside their houses with only candles and play music, laugh, sing, drink and talk to their neighbours and friends every night. Compare this to back home where most people spend the evening in front of the TV on their own, day after day.
I also have felt very safe everywhere I have gone in this country so far, people are always helpful and friendly and don’t harass you like they can do in some other countries, if they want to sell you something or ask if you want a ride they ask you once, and if you say no they leave you alone. Only time I actually felt discomfort here was when I started discussing religion in a Matatu, they are mainly Christians here but also a lot of Muslims and animist beliefs and there is no problem between the groups, actually as long as you believe in some kind of god people think you are ok.

Getting around the country is really easy which brings me to hitchhiking, this is a hitching blog so of course I have tried to hitch here, several times, but considering like 95% of the traffic on the roads is public transport it is easy getting a ride, but you always have to pay. Even in the instances when a truck pick you up and you stand in the back or a private car they expect you to pay for the ride, thankfully nothing is very expensive, with a Matatu you rarely pay more then 5000 shilling (about 1,5 euro) to get some 30-40 kilometres. They have Boda-Bodas in towns (motorbike taxis) and Matatus (minibuses), buses, trucks and pickups that go between towns, and you rarely have to wait more then 10-15 minutes before you are on the move going somewhere. They do tend to get a bit overcrowded though! So far I experienced 24 people in a Matatu (there are 15 seats) + luggage, chickens and children. 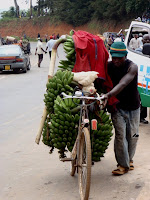 In a small Toyota Sedan we fitted 9 people and I’ve seen Boda-bodas with up to 4 people.
So the country is green and fertile almost everywhere, they have 10 national parks here and they grow all kinds of stuff, for example I’ve seen cocoa and coffee plants for the first time along much other stuff that I never heard of before. The national parks wary between big forests filled with monkeys to savannah reserves, sadly in the bigger reserves about 9/10ths of the bigger animals like elephants and lions and buffalos got poached during the Idi Amin era, but they are recovering quite fast now when Uganda has realized how much the tourist industry can do for them, sure its not the enormous amount of animals you can see in some other countries like Kenya but then on the other hand you don’t get the crowds of people and it is a lot cheaper! Also the travelling is quite cheap, you can stay in a good enough place for about 10000 shillings a night (3 Euros) and have a local meal for less then 2000 (0,6

Euro). The meals usually consist of a very large portion of carbohydrates like rice, matoke (mashed bananas) or posho (mashed white maize) and a smaller portions of beans or meat, not the greatest of culinary experiences but very filling meals, a workers meal. The bigger costs around here usually come whenever you enter a national park.
As a last note my personal view on Uganda and its biggest problem is the explosion in population growth, from 1991 to 2010 Uganda has gone from 16 million to 33 million people, so they have doubled in less then 20 years! Add a life average expectancy

of 45,7 years and 13,7 mortality rate for children under 5 years and about 10% HIV and you quickly realize that some 60% of the population is under 15 years old. So these 60% are dependant on grown ups to take care of them and they don’t contribute to society, imagine when these kids grow up and if the population keeps growing at the same speed. In 20 years there would be 66 million people living here, huge amounts of unemployed people and the local food will not be enough to feed everyone. Then I think western and Asian investors will come in and buy land, start growing modified crops and employ Uganda for slave salaries and then sell the crops to the locals for much higher prices then their own food. It has already started happening with the tea plantations around here.

A sad future indeed and I hope it does not come true, but then they need to get educated, especially the women. But it seems that poor farmers value the boys more, so they send them to school instead of the girls which just leads to more children.
Oh well, I do love this country and the people here, the nature and all the new impressions I get every day of travelling, have never had so many new impressions in any other country and I still got another 1,5 month to go :D
Hope you all had a great Christmas and New Years!
2 comments: