I have been a bit lazy on the blog writing front lately but Veronica has been writing the travel diary at resedagboken atleast, in Swedish though, but as mentioned before this blog is just dedicated to my hitching.
But hitched I have, a few times at least and just delayed writing about it but now finally I have taken myself the time to make a short (or so I thought) summary.
After Malaysia we headed over to Lombok (Indonesia) for two weeks then flew down to Perth, Australia, where I have lived some 16 months before so I could visit friends and show Veronica around the place.

We wanted to see the Margaret River region which is about 300km south of Perth but didn’t feel like spending money on a rental car so we decided to take the city trains to Mandurah in the south parts of Perth and then start hitching from there.
As expected, hitching with a girl by your side makes life a lot easier, sure not as many have the room to pick you up but at least people aren’t as afraid of picking you up as they usually are. We even got asked several times during this trip if we needed a ride without even trying to hitch, we were just walking past with our backpacks on our backs. Lady luck was also with us and the first day we even got offered to stay for free in a really nice rental vacation house. 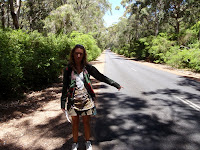 In the Margaret River Region there are over 100 wineries spread out as well as beautiful beaches and caves and much more, for example a cheese factory and chocolates factory which you can all go to and do some free tasting on. So the next 2 days we hitched between the wineries and all the other things just tasting our way around, didn’t go to well the first day because we ended up on a side road. But after a while it started going better and the next day we were on a roll even being invited to a private cellar door tasting directly from the barrels at one of the fancier wineries. I think Veronica really got new found passion for wines and wine tasting after visiting the wine region of Margaret River!

The next hitching we did was the 1000 km from Adelaide to Melbourne after having crossed the Nullarbor in a relocation camper van during Christmas and then spending new years in Adelaide. Once again the hitching went with relative ease and just after 2 rides we ended up in the Grampians National Park in Victoria where we wanted to have a look before we kept going further. Driving into the Grampians I was stunned by the beauty of the place and the incredible amounts of kangaroos that came out in the dusk, literally hundreds of them grazing for the night. Sadly the whole Grampians experience was ruined for me when we arrived in the town of Halls Gap, so sadly exploited, expensive and full of tourists. They even dared to charge 30 dollars for us to put up a tent. Hiking the trails from Halls Gap the next day was steaming hot, I passed some really nice places too but sadly there were people everywhere. If we had known this beforehand we would just have found us a bush camp while driving across the park on our way to Halls Gap so we could have got away from the crowds and enjoyed the place in it's full splendour.
After staying in Halls Gap three nights we kept on hitching towards Melbourne.
It’s interesting how I start to realize how many things you actually have to think about when hitching to make it as easy as possible and the best experience for both me and the people that do pick me up. So it felt like Veronica was my young padawan, trying to teach her the skills and tricks of hitching.
A great thing about hitching with someone else is also that one of you can relax if you want to, so one person can sit on the side of the road chilling (just make sure the person is seen by the drivers also) while the other person hitch. Same goes for riding in the car, just make sure one of the hitchers keep the driver entertained and happy and the person in the backseat can go to sleep or just daydream. The last ride we got for the day Veronica was in the front seat and I think I forgot to point out to her to keep an eye on where the driver is actually driving. Often it happens 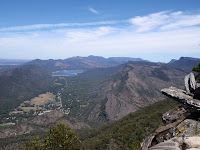 that they think they have a great idea and end up dropping you at a hard spot or by the train/bus station because they think it will help you (of course always in the best intentions). What some people don’t seem to understand is that I/we actually have chosen to hitchhike and enjoy it and therefore have no need to spend money on public transport.
Anyway, we suddenly ended up in Ballarat which is the second biggest city in Victoria and quite a turnoff from the highway to get to. So instead of walking a couple of kilometres to hitch again we took a bus directly to the Melbourne airport where we caught a plane the same day to Hobart, Tasmania. To make up on the Ballarat miss we walked out of the Hobart airport and got a quick ride into Hobart and a private tour of the town while we were at it :D 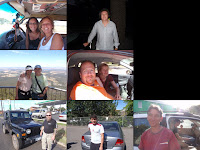 After going around Tasmania (I’m just totally in love with that island, so beautiful and amazing!) for about 2 weeks we flew up to Melbourne again, Veronica had decided that she had enough of the travelling and caught another flight that night and thus begun the long journey home to Sweden.
Myself I spent the night at the airport and the next day I took a short bus ride to get out of the city and started hitching west towards the Rainbow Serpent.
The Rainbow Serpent is Australia’s biggest Bush Doof, kind of like the one I went to outside Cairns when going around Australia. Tracey had told me about it before and it was something I really wanted to see and experience as well as catching up with Tracey again.
Located in a beautiful valley of paddocks just next to a huge forest in the middle of nowhere they had setup the area with 5 different stages and so many unique cloth and food stalls as well as workshops and other cool things. 13 000 people showed up with their tents and campervans and the doof kept on going from Friday 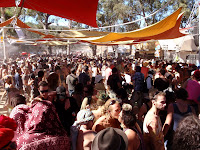 afternoon until midnight Monday night. So I went there and found Tracey, who’s car I would recognize anywhere. Then I had a blast with her and her friends for the next couple of days. The music was a bit of a disappointment, very few times they found just the right beat but everything else was amazing, the people, they way they dressed up and the art and workshops around. The heat was scorching during the days and really cold during the night, but it all just added to the total experience.
On Tuesday Tracey gave me a ride to the airport in Melbourne only for me to miss my check in by 2 minutes because of the signage to the showers on the airport! So I had to pay another 100 dollars to get on the flight the next day and decided to save money and spend the 25 hours on the airport which gave me the time to write this entry 
Next destination, New Zealand.