Landing in Christchurch, New Zealand, I was a bit confused what I would do next because I had expected Veronica to be by my side. But as I was now here and got a one year working holiday visa I headed into town and found myself a hostel. The next couple of days while trying to come up with a plan I also got myself a bank account and tax number and I tried to have my phone unlocked, which was a lot harder then one would think.

So after a few days messing around and actually catching up with a friend from back home which just happened to be passing through Christchurch I gave up (on the phone part) and just decided I would leave town and see where the road takes me. I took a bus to the north outskirts of town (I never been north of Christchurch before, but I was in NZ in 2007 and went around the rest of the South Island) and started hitching, as usual its hard to get out of a city but once I got a ride everything started rolling and the next few days was just great.

The first guy to pick me up bought me an ice cream when he dropped off, the second guy adviced me about great WWOOFing places he knew about in his area and gave me a bunch of organic fruits that he had grown himself. The third guy showed me a great spot to camp for the night. Later on two American guys came and put up their tent close to me and we got talking and the day after they gave me a ride further up north to Picton. From there I went west on a scenic route with a dutch dude followed by a brittish couple on their honeymoon! 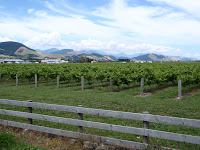 The thing about New Zealand is that hitching is still going strong here, just in 3 days I have seen 12 other hitchers out there, compare that to Australia where I hitched for 150 days and saw in total 1 hitcher on the roads! So getting a ride in New Zealand is really easy, people around here are used to the hitchers which is great. But then on the other hand it does take away the uniqueness of what I am doing and doesn’t make me that exciting to people that do pick me up.
Finally I got to the town of Nelson in the north and checked into another hostel so I could have a shower and go through my options of what to do next.
That evening and following morning I called a few different WWOOFer hosts, I have explained this on my Oz hitch, but WWOOF stands for willing workers on organic farms, in short it means you work at a place for 4-6 hours a day and they feed you and give you a place to sleep as well as teaching you about what they do and show you around the area. Finally I found someone that had room and it just so happened to be one that the guy recommended to me the other day! 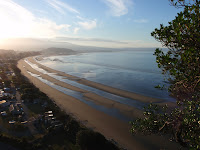 So I hit the road again and two quick rides later I arrived in the small town of Pohara in the Golden Bay region where I’m now at.
So the next two weeks I will be working here a few hours a day at a place called Sans Souci Inn. It’s owned by a lovely Swiss couple, Vera and Reto, and they have accommodation and a restaurant at a really beautiful spot just 50m from the beach. 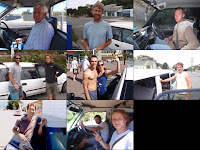