As most of you probably know I and Veronica flew down to Malaysia to spend two weeks in the country before continuing to Bali and then Australia for a while and going to New Zealand to stay for a year after that. 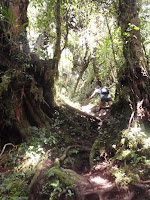 It’s the first time for the both of us in South East Asia so we started out pretty cautiously being herded around like most other tourists, but it didn’t take many days before the both of us got sick of it and started catching local trains and buses instead until we ended up in the town of Gua Musang which from there were no buses going west to Cameron Highlands where we wanted to go. So we decided that we should try to hitch instead, being the first time I hitched in a country that I did not understand the local language (not counting Finland) it was an all new experience.
It took us some time to get the first ride, but as previous experience has shown you have to get out of the city on a road with no major intersections so people know what way you are heading, and once we walked out of town sweating like pigs in the 30+ 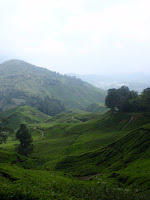 humid heat with big backpacks we got picked up by a truck. The guy spoke very good English and dropped us of some 20 kilometres later at a turn off and it didn’t take long at all to get another ride with another truck packed to the brim with big logs. This time the driver spoke no English at all but was none the less a very happy guy playing the same cd over and over while tormently slow going up and down and round the corners into the highlands doing about 15-20 kilometres an hour, so it took us about 3 hours to get to where the plantations of the highlands were starting, and another minute later we were sitting in a new car getting a ride to the town of Brinchang where we wanted to go. 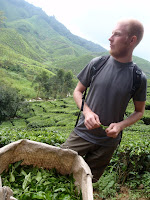 So it seems hitching is extremely easy in this country being a backpacker (looking like a westerner and having a big backpack does the trick I guess).
The following day we trekked up the highest mountain in the area (Gundum Brinchang, 2063m) and then walked down a road getting fantastic views of the tea plantations and trying some excellent tea directly from the tea factory. After that we hitched back into town which proved to be really easy once again.
So that’s it, a new country and a new continent hitched :)
Keep checking here for more entries in the future (maybe at the page as a RSS feed or subscribe to it)

Edit: And oh, as I mentioned before I am really bad at giving people my number or telling them about my blog, so just before I left Sweden I had a “business” card printed, just saying “Sibbe The Hitcher”, and I tell people to just Google it. So I guess having a business card makes me a professional Hitchhiker? =P 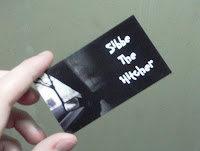