I left Takaka around noon the next day, turned out to be quite a queue, but after 1,5 hour it was my turn. A couple of rides later I arrived in Picton just to miss the ferry by the minute. I did get on the next though and 3½ hours later I arrived on the North Island in the capital of NZ, Wellington.
Arriving eleven in the evening in a city is not the best of ideas if you haven’t booked a place to stay, especially if there is a big music festival coming up the next day. I had to walk through the city centre forth and back with everyone out partying. I went through every hostel in the centre of the city until in the last one the receptionist felt sorry for me and put me in a room that was already full, 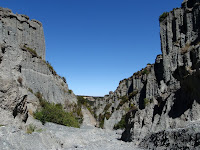 but had a lots of couples in it. During the night though these young kiwis that were in the city for the music festival came into the room several times turning on the lights and screaming, I probably would have slept better at a park bench!
The next morning I headed out of the city as fast as I could, took a train to the outskirts and started hitching again. Now my luck took a 180 degree turn!
The next guy was David whom was on his way to his brothers 48th birthday at his sisters place, so he invited me to come with him and I spent the evening in this 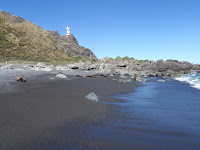 beautiful valley with Dave and his brother and son, sister and brother in law which were both professional sheep shearers, going to Norway every year to shear. We had a big barbeque and drank plenty of beer and whiskey that night. I had a great night but a little to topped up on beer I successfully ruined one of the zippers on my new tent, so now I wont be able to sell that either (really don’t like it), and I hope it doesn’t rain to much because then I will get wet!
The next morning Dave drove me a bit back on the way and bought me an ice-cream before dropping me off. From there I hitched south and 3 rides later Duncan and Sarah and Sarah’s mom whom was visiting from England for their wedding which they just had a few days earlier picked me up. Duncan had sworn that he would never pick up a hitcher again because of some weird previous experiences, but who can resist me standing there? 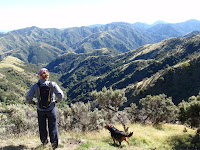 They had a Sheep station down by Cape Palliser where I was heading, 7000 acres and 3000 sheep + some 300 cows in the Aorangi Range, really hilly country! They told me I could put up my tent by their woolshed if I wanted which I did so I would have access to a toilet and a lunch room.
The next day I hitched to the Putangirua Pinnacles and went for a hike looking at the rock formations that was used in the Return of the King during the Dimholt´s Road scene. Then I hitched down to Cape Palliser which is the southernmost point of the North Island. A lighthouse and a big seal colony kept me busy there for quite a while before I hitched back to my tent at the woolshed where a cold beer and fresh eggs was waiting for me.
The next morning after having breakfast with my hosts I went with them to muster sheep in one of the “paddocks” because they were getting sheared the next week. This turned out to be harder then one would think considering the area is covered in wooded hills up to 600m high. So we drove to the top of the hills then two of us started hiking down trying to find and herd as many sheep as possible with the help of the dogs, Duncan just kept going up and down these hills, guess you would get pretty fit doing this so often. After the mustering and having lunch in the house they drove me up to the town of Masterton and bought me an ice-cream in the same place Dave had before dropping me off. 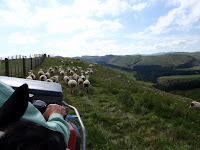 Yet another couple of rides and heading away from the highway to the less trafficked roads this woman Vicky dropped me off just outside their house, which was also a sheep station and told me if I didn’t get a ride within a half an hour I should come over to the house (Was around seven in the evening, so dusk was approaching). So after a while I went over to the house where she fed and let me sleep the night in the house, later on her husband George also came home. George and Vicky had 1000 acres and 2000 sheep + cows, quite different from Duncan and Sarah and in the morning after breakfast I went with George to do some mustering, moving sheep and cows between paddocks. Doing it in these lands which also were quite hilly but not covered in forests we never even had to get off the quad bike unless we were going through/opening gates. Maybe Sheep Herder is something I should become in the future? Afterwards Vicky made me some lunch to take with me and I said goodbye and kept hitching on yet smaller roads until I reached the Waihi Falls which is a very beautiful waterfall but very unknown to the public because it isn’t mentioned in any of the guidebooks. I ended up staying by the falls for 20 hours with only one couple from Auckland coming by to have a quick look. I spent the day swimming in the pool below the falls and sitting in the shade reading and listening to the noise of the falls, I did slip though walking around on the rocks by the waterfall (I never learn do I?) and hurt my left foot.
The next morning I left around 10 and two sheep farmers (yes, there is still a lot of sheep in NZ!) later I came to Dannyvirke from where I hitched north to Norsewood which is a town founded by Norwegians! There is also a wool fabric called Norsewear in town which makes very good and cheap wool socks so I had to make a stop and buy me some new hiking socks before continuing. A few rides later I arrived in Napier where I am now, have to run a couple of errands and wash my clothes and stuff so staying at the backpackers here two nights while my foot recover, half of it is blue now by a huge bruise. 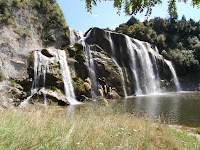 So far I only seen one hitcher on the North Island, way less compared to the south but they still are around.
Oh and by the way, I don’t know if I mentioned the animal thing about NZ yet. But one thing they have for sure and lots of it is sand flies, and god do I hate them, they keep on having a blood feast on my feet every day, not a nice sight. At least they don’t carry malaria so they wont kill me! 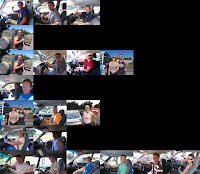 Sibbe, great to meet you, I'm looking forward to seeing my picture on your site! I forgot to ask though what you were doing around waipatiki, I guess I will have to read about it. Later.

Hey Jeff! Thanks for the ride :)
Thought just when you drove away that I should have gone with ya back to Napier and we could split a case of beer there :P
Just had a look around :) Found me some nice Paua shells and Cats Eyes also

Simon, Jian is here to read your blog. Nice to have you on Sunday and see you later and have a good luck on your trip. God bless you!