The next morning I continued north to Waipatiki beach and from there I walked over to Aropaoanui beach, both were quite nice beaches but nothing out of the extraordinary. However I did find some nice Paua shells there to take with me. Then I backtracked a couple of kilometres and went Northwest until I arrived by the Tarawera tavern, halfway to Taupo. Close by there is an awesome hot spring. The signs says it is closed, but it really isn’t, but DOC (Department of Conversation) have stopped

maintaining it so they had to put up the sign. This means very few actually go over to the springs so after putting up my tent and having a few beers at the tavern I headed over there while the sun was still setting and then enjoyed 4 hours of very hot relaxing, would guess the water is 45 degrees, takes quite a while to get used to! During the evening in the spring I had a Possum walk by just 1½ meters away from me! Possum is a native in Australia, but never managed to see one over there in the wild. In NZ they are considered a pest though.

New Zealand may be extremely dramatic and beautiful country littered with waterfalls, hot springs, beautiful views and beaches. But one thing is missing, and that is exciting animals! There are none, whatsoever, native mammals on NZ (ok, that’s a lie. There is actually 2 species of bats that are native). Neither is there almost nothing dangerous or poisonous out here (2 very rare spiders). So all the mammals that you can find in the country have been introduced. For example wild pigs, goats, deer as well as Possums. One thing NZ have though is several quite unique birds; personally I never found them as exciting as mammals though.

The next day the hitching slowed down, and it took the whole day to get back to Napier and then hitch 100km north to Wairoa, the last guy to pick me up though was this Chinese teacher Jian, whom told me I could stay at his house if I wanted which I did. I was rewarded with a nice Chinese dinner cooked by Jian.
The following day was another really slow day of hitching, but I did get picked up by a dude named Chris who bought me lunch and while he was on a meeting in Gisborne I tried to find a boogeyboard to buy, sadly I didn’t find one and after the meeting he drove and dropped me off outside town. Then it took me 6 hours to get the 40km I wanted to go next. So I arrived just before dusk at the Rere Rockslide.
Next morning it was raining, but it stopped around 10 so I got up and checked out the Rockslide. Rere Rockslide is this amazing 60m long natural slide, just like a giant waterslide in a theme park, just made by nature! 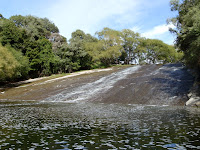 I found a half broken homemade boogeyboard which I used and broke even more after a couple of fun rides. From there I walked back on the road for about 2,5km to Rere Falls which is another beautiful waterfall that you actually can walk in behind, quite cool. While I was there an Irish couple came by and they gave me a ride back to Gisborne so I could get out on a road with some proper traffic again. I headed northwest for quite some time and eventually got dropped of in the small town of Te Teko. It was starting to get late and I was looking for a place to put up my tent walking through town when a police car came by and asked me what I was doing there. The officer told me this was probably one of the worst areas in NZ I could be in because of Maori Gangs so he gave me a ride further down the road to a hidden away campsite by a lake. He dropped me next to a campervan that was already there and an older fella that was in it came out and had a chat with me. His name was Jim and later on in the evening he cooked me dinner with some nice trout he had caught the same day and afterwards we shared a couple of glasses rum and coke while discussing all kinds of things, turned out Jim was quite the bushman and had lived a very eventful life.

The next morning he gave me a ride to the Soda Hot Springs and gave me another piece of the trout to cook for dinner. The Soda Hot Springs which used to be a nice free spot had been commercialized just last year and I decided not to go in there if I had to pay. I hitched west to Tutea Falls and did a hike along the stream watching people white-water raft going over the world highest commercial run drop of 7 meters. I also managed to see a Tui here, which is quite a unique and native NZ bird. Next I hitched down to Rotorua and found a hostel so I could recharge my camera and more. Also cooked myself quite a feast this evening and got me some more insect repellent for those annoying sand flies, tomorrow Ill keep heading south into one of the most thermal active areas in the world.

Fab pictures! Especially on the waterfall, looks huge. Would have loved to be there to see the possum =)
Är imponerad över hur länge skägget växt, ser riktigt najs ut i skumrasket ^^