The area around Taupo and Rotorua has quite a lot of sights, so here is yet another entry with new pictures!

After having a steaming bath once again in Kerosene Creek I hitched to the area just north of Taupo and first checked out the Aratiatia Rapids which is created when they open the gates of the hydro power plant letting the water flow through the canyon, they do this about 4 times a day. From there Craters of the Moon was pretty close, an area covered in collapsed steaming and hissing craters where you walk around on a planked walkway for about an hour. 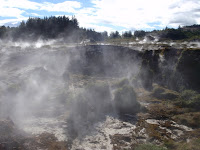 Next I camped in the nearby area at one of the most popular freedom camping areas in NZ, Reids Farm, just north of Taupo and the morning after when I woke up I hiked 30 minutes north to Huka Falls which is quite impressive, not a very big drop but it have some really strong rapids and is spewing 200 000 litres of water over the edge every second. From there I hiked south on the other side of the river (campsite was

on the west side) until I came to the Spa Park Hot Springs which joins the river just north of Taupo. Because they are mixing with the river you can select yourself just how hot you want the water to be. The rapids, waterfall and spring all are part of the Waikato river which is the longest river in NZ and just amazingly blue!

Next I hitched south and into Tongariro National Park which is a World Heritage Area of both cultural and natural importance and the worlds 4th oldest national park (NZ oldest). Within it is 3 big volcanoes, the most famous being Mount Ngauruhoe, aka Mount Doom from the Lord of the Rings trilogy! Last eruption from one of the 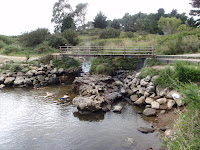 volcanoes was in 2008, so they are still very active. Mt Doom hasn’t erupted since 1977 though. This is the place I looked most forward to on the whole trip on the North Island and today and the upcoming days I will be walking the Tongariro Northern Circuit which is voted to be one of the top 10 hikes in the world (either this one or the Routeburn, another NZ track, is always on those top 10 lists). 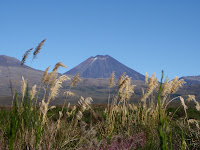 By the way, people who get divorced should travel to NZ and climb Mt Doom and throw that evil ring that have control over them in the crater so they get rid of it once and for all!! Mwuahaha, nerdylicious!
Edit: Lots of pictures in this entry, and because I have a lower resolution on my netbook compared to a normal computer it may look right for you guys reading this with all the pictures, but oh well..