The other day I arrived at what I thought would be middle of nowhere, a dead end road. But it turned out several hiking tracks was starting there leading to different huts and other tracks, I felt all warm and fuzzy inside!
All around New Zealand you can find this, huts and tracks everywhere. Often passing or leading to rarely visited waterfalls or hot springs, the sad thing though is that DOC isn’t getting enough money to maintain all of them and so one by one they get closed down and eventually overgrown. Most tourists only ever hear of the 9 famous great walks despite there are so many other nice ones out there. 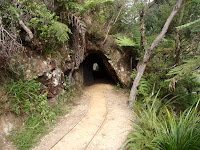 From Waihi I hitched just down the road 5km until I came to Karangahake Gorge which used to be one of New Zealand biggest gold mining regions, DOC has done a beautiful job restoring most of it and you can walk through the picturesque gorge passing swing bridges, old train tracks and old mining tunnels. I hiked through to a river campsite where I stayed the night. Was planning to stay more nights but seeing 4 rats while just going for a short walk and finding them at my tent when I got back I decided to keep going the next day to Waihi beach instead. From here I walked along a hiking track north for about 2 hours until I got to Homunga bay. I was expecting a beautiful beach for myself but it turned out there was already some 10-15 surfers 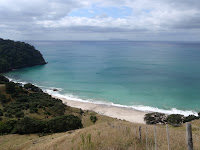 there and humongous waves! I cooked my dinner and watched the surfers before I went to bed, the next morning I found that my bread had been eaten by rats (or possums). I still stayed the whole day on the beach and this day only one couple came by during the whole day, so nice and quiet. Stuffed my food just next to me outside the mesh of the tent (tent is to small to keep things inside) and went to bed only to wake up during the middle of the night to find that a rat was munching on my oats just 20cm away from me, cheeky bastards! Haven’t had any problems with the animals before when I hitched, don’t know what’s up with this sudden wildlife assault on my grub. 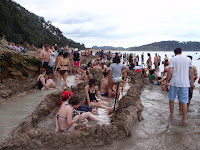 Next day I hiked out to the road, hitched back to Waihi then north and had a freaky day of hitching. First I made a quick stop at the library in Waihi and there just next to me sat a guy from Hawaii that had given me some bread at Tongaporutu, some 350 kilometres to the south, just 7 days before. I hitched north and got picked up by German girl that had been riding with a kiwi guy and was the first couple to pick me up leaving Tongaporutu at the same day as I met the Hawaiian! But it did not end here, a few rides later a polish couple picked me up, and guess what. They were the couple that picked me up the same day just when the kiwi and German girl had dropped me off! Weird.. 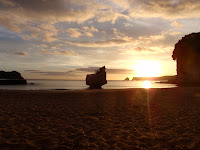 The destinations of the day was Hot Water Beach and Cathedral Cove, both are quite known and popular places and that it was Saturday didn’t make it better. Hot water beach is a beach where you have hot water coming up from the ground at a certain area during low tide, so people dig their own small little spas in the sand. But it was very crowded and I headed on to Cathedral Cove instead which probably is one of New Zealand most famous beaches and starred in the second Narnia movie. It has a natural tunnel and several huge pillars as well as beautiful blue water, white sand and islands in the distance. When I arrived there was hardly anyone there but soon people started pouring in, on the north side there was a big beach party with about 30 people and on the south side where I put my stuff some 20 American youngsters came to camp the night. But I stayed anyway and slept the night under the stars on the sand, was a beautiful night. But still no peace from the wildlife! During the night I woke up by a mouse running over me and the next morning when going for a swim the seagulls went for my lentils!
I hitched back to Waihi because I found myself a wwoofing host there and that is where I well spend some time for now. This is quite a different host, more like a community, the hosts are a young couple, Brazilian and Aussie and there is plenty of other wwoofers staying in the house, 5 French, 3 other Brazilians, one German girl and me at the moment. The work we do is selling local fruits from the side of the road in a van in the surrounding towns; actually I quite like it because it reminds me of hitchhiking! Sit on the side of the road looking happy and tidy showing what you’ve got. And as soon as someone stops try to be as social as possible to get them to buy extra stuff. Just like hitching! :D

Nice work simon, we stayed at the same woofing place! Great place you could stay their for a long time!


Hi, Neat post. There is a problem with your website in web explorer, might test this? IE nonetheless is the market leader and a huge part of other folks will pass over your great writing due to this problem. netflix login