I have realized something lately. People usually ask me what I think of their country and I always have positive things to say. 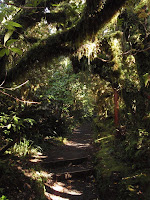 But in reality this is because it’s only nice and friendly people that pick me up, the grumpy, stressed and scared ones would never let me into the car to start with. This leads to me getting an image of a country that everyone is really helpful and great which isn’t in reality true. Good thing or bad thing? Well I can’t complain because I don’t have to deal with the sour apple, but it still gives a kind of warped image of the countries I travel through. 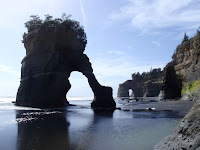 From Tongariro I hitched west to Mt Taranki which is another big volcano, but this one is on its own which makes it quite impressive and I am pretty darn sure it will be used as the Lonely Mountain in the upcoming movie The Hobbit. Sadly the weather around Taranaki is extremely unreliable and I didn’t see the whole mountain once during the few days I spent in the region. I did go for a short hike in the rain halfway 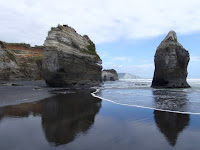 up the mountain and slept for free in a hut before heading north. It was the WOMAD music festival starting in the north Taranaki region so tons of cars and hitchers were going through so it wasn’t to hard getting a ride. I headed north to Tongaporutu and the three sisters where I stayed two nights so I could catch the low tide and have a walk on this incredible beach, black sand with towering cliffs nearby, huge white cliffs in the distance and if I had been lucky Mt Taranki in the backdrop. 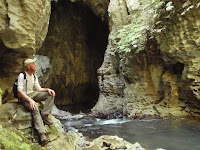 I headed further up and inland next heading for the Coromandel region. I did a few stops on the way, among one of them the highly commercialised Waitomo Caves, didn’t pay to go into any caves though. Other then that the only thing that was quite extraordinaire on the way was seeing my first Kauri trees which are these huge native trees. 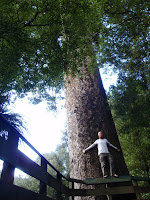 For my birthday I stayed in Waihi, which is a gold mining town, in a shabby hotel with quite cheap rooms. Not exactly what I had in mind but the evening turned out quite fun anyway. Spent it with the 3 other hotel guests, one 70 year old aussie builder, one 60 year old kiwi with some weak version of Parkinson? And one middle age Indian guy. So I had myself a proper feed and shared a bunch of beers talking about all kind of things.
The last few days I have been a bit sick of being on the road so the upcoming weeks I think I will just generally drift around the Coromandel area, I don’t feel like stressing around to see different things. Maybe I will go wwoofing somewhere.

Simon, my God!!! I would have NEVER thought you'd get to all the places that you do via hitch-hiking...I'm super-super impressed!
Your pix make me yearn for the north island so much...I can't believe you got to go hug my Kauri friend even (more exclamation points here!!!!)
I could easily comment on your every entry, but then I'd get nothing done on my oregon books. Hope the woof goes FUN...then I'll catch up when you're back on the road i guess. I am super glad that you made it up Ngauruhoe, even if the clouds swept in....who woulda known that the tongariro would be better than the hyped Abel Tasman??!!....scott