Leaving Broome went pretty smooth and I even got offered an IT job and sponsorship visa with the first ride, in Halls Creek though and anyone that ever been there probably can understand why I didn’t say yes at the moment he offered it.
Next I got picked up by a lovely family (parents and two kids, 8 and 10 years old) driving in a rebuilt bus. They eventually dropped me at the turnoff to Marble Bar (650km from Broome) but just as they started to drive away I realized my battery charger was still in the car with all my batteries! Tried to get their attention but didn’t succeed. So I stood there for 10-15 mins just thinking if I should try to catch up with them because I knew they were heading for Port Hedland and maybe were staying a night there at a caravan park or if I should just forget about it and keep going to Marble Bar. But I came to the conclusion that I really 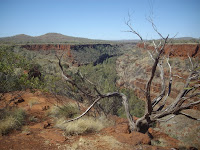 needed my batteries and caught a ride to Port Hedland, once I got there I went through all the caravan parks (3 of them spread out) and couldn’t find them anywhere! But the couple I was riding with suggested we should look in the town centre. On the way there I finally saw them filling up fuel at a servo! Lucky me :)
Got talking to them again and found out they were skipping Port Hedland and heading directly for Karininji National Park. Deciding Marble Bar wasn’t really worth the effort going to (not that warm at the moment anyway) I chose to go with them south, getting free dinner and beers that night sleeping at a rest stop and then going into Karinjini NP the next day doing one hike in Dale Gorge and checking out all the outlooks with the family. They were heading to Tom Price that evening though after dinner and I was getting very stressed out with my visa expiring soon so I rode to the T junction heading west towards Tom Price and got dropped off there putting up my tent for the night. I would love going back to Karininji one day if I can though, another amazing National Park with so much to see that I missed. Next day I got a ride with a few cars and a truckie to Newman, wanted to see the Mt Whaleback mine which is the biggest open cut iron-ore mine in the world. But sadly I missed the last tour for the day by an hour and didn’t want to stay a whole day just waiting there so I kept hitching south catching my second ride on the whole trip with a roadtrain, so I got all the way to Cue that night. I could have gotten almost all the way to Perth but wanted to check out Walga Rock because I missed out on both the Whaleback and Marble Bar. 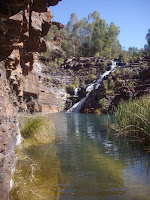 Interesting note from Cue, talked to a grey nomad there (that’s what people living in their caravans travelling around Oz are called, usually retired people) and most of them were prospecting there! (Looking for gold). They guy I talked had found 7 ounces the last 4 months just walking around the outback with a metal detector. And at 1000$ and ounce that’s a pretty nice addition to your super (retirement fund). It really shows how much Western Australia is the land of opportunities! There is so incredible much work here with all the mines where you can make so much money. And Perth is booming so much at the moment so they are looking for staff everywhere! Can’t understand why not more people from back home come over here and work, such a great place to live in with all the work around, the nice weather and friendly people!
Next day I got a ride 11km out west of Cue and then I sat 4 hours at the road towards Walga Rock without a single car going that way! So still being stressed I decided to skip Walga Rock to and hitched a ride back to Cue and then got another ride with a Roadtrain (shitloads of roadtrains heading up and down the Great Western Highway because of all the mines). This guy ended driving me all the way to Perth! Got there around midnight and he said I could sleep at his place down in Fremantle and gave me dinner and breakfast. 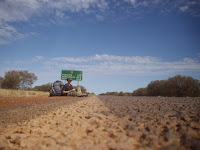 So I’m back!! :D Didn’t take me many days to get the long way between Broome and Perth, but I really stressed it all through. But if I’m allowed to stay longer Ill go back up there next year around March/April.
Headed over to Sannas place in the city today and going to stay here a couple of nights, looking for work so I can get me some money because I’m pretty broke at the moment. Trying to get myself a extended visa so I can stay here another year but don’t know if Ill get it so cant get a full time job or apartment yet, and I really hope I get one because my current visa is expiring in a month and I don’t have a return ticket and cant afford one either! :S
Anyway, I will make one more entry in the blog in a few days with statistics, comments and afterthoughts so keep looking here.