The rangers weren’t too happy with me in the morning after sleeping in Geikie Gorge, apparently they knew I was there but couldn’t find me, haha! Not much they can do about it though.
Took a short boat cruise into the gorge in the morning learning more about the old reef walls and spotting quite a lot of freshwater crocs.
After that I headed a bit west of Fitzroy Crossing then north on a dirt track until I got to Tunnel Creek which is also part of the Devonian Reef (as is Windjana Gorge where I went next). 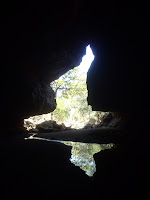 Tunnel Creek is this carved out tunnel through the mountain stretching about 750m, from 3m to 16m in height and about 20m wide I would say. No lights or paths or anything in there, you are just recommended to bring a torch and shoes. I went barefoot with my extremely small torch and I was lucky because there was almost no one else when I was there (three busloads came in just when I crawled out though). Its quite exiting because you cant see anything at all except where your torch is shining and the creek goes up to your knees it some points. You also know the place is full of bats and small crayfish and a few freshwater crocodile babies. I had a good time anyway. 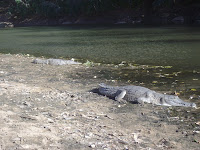 After that I had to spend a few hours before I got the next ride and god the heat is really starting to get to me! It isn’t always you can find some cover from trees and it’s between 30-35 degrees up here during the days in the shadow because winter is starting to come to an end. Anyway when I was sitting there it was close to 35, I had cover from a tree but I still noticed every time I got up on my feet because a car was passing everything just went black for a few seconds. But as long as I have water and can get that little shade I should be ok, starting to head south now anyways so I’m getting away from the heat, or.. hmm. My next planned stop is Marble Bar, Australia’s hottest town. Also claimed to be the hottest town in the world!
After Tunnel Creek I got a ride to Windjana Gorge as I mentioned and I slept the night there in my tent, the next morning I went for a hike and saw tons of freshies, Windjana is probably the best spot in Australia to see them. 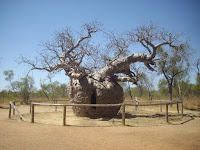 Then I headed towards Broome, it took me most of the day but I got there in the afternoon making a stop at the boab prison tree which is this huge hollowed out Boab tree which they used to keep Aboriginal prisoners (slaves is a better name..) during the nights when bringing them north to Derby so they could work in the pearling industry.
I’ve been to Broome once before, in February. But I didn’t like it very much that time because of the unbearable heat and you couldn’t go for a swim in the ocean because of the highly deadly jellyfish they have here. But I do love it this time! The weather is awesome, no jellyfish at this time of year and Cable Beach is one of the most awesome beaches in Australia in my opinion. Being 22km long, having an 8m tide (which create a huuuge cleaned beach every day) and having a perfect sunset every evening just makes it such a nice place. 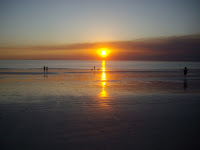 I slept my first night in Broome at the beach under the stars and I just have to mention (maybe said this before?) how extremely well I sleep on my 5mm foam mattress in my small tent! It was a bit rough in the beginning but the more I sleep in it the more used I get to it and enjoy it. I have so many dreams (really good ones to, most of the time!) every night that I remember and I wake up every morning to the sun rising and all the birds singing to me. I sleep horrible in the hostels and I wonder how I ever will be able to sleep in a normal bed again! 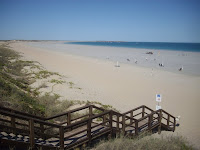 But once again, you are not allowed to sleep on the beach so the ranger got a bit pissy with me in the morning, but it’s my own fault because I slept so close to the stairs and showers. If I just slept another 200m away she would never have seen me, but at least I didn’t get fined. So checked into a hostel now instead staying two nights, wasn’t planning to stay that long here but really want to see the Olympics Opening Ceremony tonight, and that’s kind of hard to do in the middle of the bush!
Yesterday I went to the Crocodile Farm here, now that’s some wicked animals! 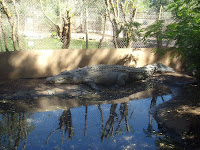 Been around the last 200 million years and developed to become the ultimate predators. I did have a lot of respect for them before, but it has increased so much after learning more about them and seeing the 5-6 meters beasts and how they can hide in such a small pond and strike so fast not giving you any chance to defend yourself.
I wonder who would win a fight between a white pointer, a polar bear, a tiger and a saltie! Ahh, one of life great questions! My money goes on the saltie though.. But I do guess it depends on where the fight would take place.
In the evening last night I went to the outdoor cinema to watch Hancock. The cinema here is the world’s oldest outdoor cinema, quite nice! And Hancock was actually way over my expectations (had very low though).
Have restocked everything, had a shower and shave and tried to get my shoes a bit cleaner and less smelly (only have one pair, and a pair of thongs) although it seems impossible. So tomorrow morning I’m off again about 750km to Marble Bar, my next stop.