Sorry this took 2 weeks to get posted, I just become such a slacker once im back in the city and got internet again. Going to be quite a long entry.

Anywhere here is the statistics from the trip around Australia:

I measured the distance on Google Earth, so it isnt very precise and probably quite shorter then I actually hitched considering all the turns and corners I cant measure.
My goal was to spend under 50$ a day, and looks like I did a pretty good job. And this does include buying a new computer, phone and camera! (A total of 770$) and two expensive tours (Whitsundays and diving Great Barrier Reef) adding up to another 725$.
Off the 272 Vehicles around 15 trucks in total I would guess, which of 3 were roadtrains. Nothing else unusual sadly (like bikes, trains, coppers and so on). But tons of locals driving Utes (pickups) before Cairns and mostly caravans after.
Longest I hitched in a 24 hour period is 1440km which I think is quite impressive, and that was on the first day of hitching! Highest number of cars in one day I think was 9.

I do like to split the whole trip in two different parts though, before Cairns and after Cairns. Why? Because if you look on a map Cairns is halfway around Australia from Perth. I also changed my whole way of thinking and hitching leaving Cairns. I adapted a true Australian No Worries attitude and thinking. Before Cairns I always tried to find a place to sleep for the night (preferable Hostel) and did proper cooking and spent alot of money (the eastcoast is expensive). Leaving Cairns I just didnt care anymore, I lived on beans, noodles and peanutbutter jelly sandwiches or whatever people I met on the road fed me (and I got fed alot!). I slept 6 out of 37 nights in a bed, alot of the time I just put up my tent just on the side of the road in the middle of nowhere. If I was suspecting I was going to get stuck there for the night before the sun set I made sure I found a flat spot where I could set up my tent and started to collect some firewood so I could do some cooking. It did change my view on my journey, my life and my way of travelling alot. Anyway here is the statistics, and as you can see they are quite different in money spent and distance travelled each day.

So did I suceed with all my goals and challenges and did I go everywhere I wanted to go?
Well, I far from went everywhere I wanted to go. Had to skip Tassie because it was to cold, had to skip York Penninsula because it was just to hard to hitch there (and didnt have the time) and had to skip the Red Centre because I ran out of time! This darn country (continent!) is just to freaking huge! Despite Ive been on the road for 5 months, hurrying alot, Ive seen such a small part of the country. I have seen most of the famous stuff though except the Red Centre with Ayers Rock. I could easily go on another hitching trip for another 5 months not going to a single place Ive been to before. I also stressed through WA, South Australia and Victoria (SA took me about a week and Victoria a little longer). I took it pretty easy in NSW and in Queensland all the way up to Cairns, then I got really stressed out again because I was running out of time on my visa and out of money! So hurried west to NT, saw everything I wanted to see there though except the centre then I saw quite alot on the way to Broome in WA. But leaving Broome I put in the highest gear on the way to Perth.
About my challenges, mentioned before I did it under 50$ a day. I also never ate at a single of the famous fastfood places going all around! The handstand and learning to ride a horse I learnt the basics of you could say, not as good as I wanted it but better then nothing I guess! I did never plan a pickup beforehand but I did ride with 2 people more then 2 days in a row, Trippie Trace and Luke (Luke only drove me about 25km the third day to get me to the Wolfe Creek Turnoff).

So am I happy I did it? Hell yeah., it was the trip of my life and it just made my craving to travel the world even bigger!
Would I do it again? No, sadly not. Not around Australia anyway. Oz is just to big and it gets to lonely after a while just meeting new people every day, if I did have a partner though I dont think there would be anything stopping me from travelling nonstop for a couple of years just picking up random work every now and then. If I do stay in Australia though I do have a couple of trips planned, one to the red centre, one to Tassie and another one up the westcoast. These are all shorter trips though and shouldnt take more then a month each.
Any regrets? Well, I like to say that I cant ever regret getting a ride because if I didnt get into one car the following events, days and people I meet would never have happened so I cant really regret any rides. I havent had any bad rides though. I have met and rode with some amazing interesting people and I also have been riding and met some weird, freaky and strong opinionated people but nothing to bad and they have all added to the complete experience. I do have two regrets on this trip though. First not buying the coolest sunglasses ever that I saw in Melbourne at the Victoria Markets, but Mette convinced me not to buy and when I came back the next day they were gone  Secondly not getting into that car in Ingham when a really cute girl came up to me and asked if I needed a ride, im just such a dumbass.. but we all knew that already didnt we?
Would I do anything different if I did another lap? Yeah I would, pack less stuff. Might not even bring my tent and probably just 2-3 changes of clothes. Everything to carry as little as possible enabling me to walk and do proper hikes bringing all my stuff. I would sleep much more outdoors where it doesnt cost me anything. I would also keep altogether away from the eastcoast because I cant really say im a big fan of the eastcoast, just to expensive, crowded and touristy.
Theme song: The Passenger – Iggy Pop :D
Also One Love – Bob Marley among others has cheered me up so many times while Ive been sitting on the side of the road thinking about the world and the punity of our existence.

So what happens next? Well Im currently sleeping on the floor (literally) at Sannas and Marks apartment. My visa expires in 25 days, Im broke and I dont have a flight ticket back to Sweden. I am trying to find a way to stay longer in Australia, because I really love it here, but the situation is starting to look really bad. I did make alot of plans when I was out on the road what I would do when I got back to Perth but havent been able to do anything yet because I dont have any money and dont know if I can stay or not.
If I have to go home I guess Ill live with my parents and stay there for a while and save up money so I can travel more. Want to hitch over to Ireland and drink some Guiness :D Want to go over to Canada on a Working Holiday and last but not least I have my next big challenge set up for me, hitch all around Sweden and Norway seeing all the ”sights” and not spending more then 25SEK a day! (2.5Euro, 5$). Alot of people probably wouldnt call it a life but I see it as a great challenge and it would be fun to see if its actually possible.

I have taken over 1800 (after deleting quite a few) photos on the trip around and its impossible to show them all without boring people, but for anyone who has facebook check out the album I just put up with Sunsets/sunrises hitching around Oz. Also thinking about putting up a beaches album and one with roads of Oz.

I feel that I have forgotten quite alot of stuff that I was planning to write here, but better to put it up now then waiting to long.

So last but not least, thanks to everyone that supported me on this trip, had the patience to read my blog and everyone that picked me up on my way around Australia! Hope someone actually enjoyed reading it, just wish I was a better and more interesting writer (need to find myself a journalist GF!)

Until the next time, live life to the fullest and seize the day! 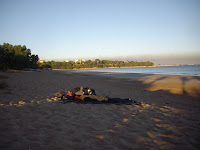 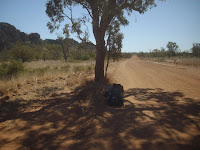 I loved your blog Simon. Sad to see it come to an end. If you need a place to stay I have a spare room. Keep in touch!

Way to go, Helgur, I loved reading every entry. See ya on the TFH forums! :)

Sad to see the tale come to an end Simon, or maybe it won't. It sure would make for a good book...

I've read every entry and seen every photo and it's amazing what you have done.

I always say Abbekås fostered a bunch of slackers and artists.. quite true :)

I wish you you all of luck with your plans and further travels, be sure to blog about them, I'll read it :)

wow finally! great to have met you in one of your pit stops! i can't believe you actually made it, and i can't believe it was more than 5 months ago when we met in kangaroo island. man this endeavor of yours took a long time. but hey, happy to read that everything was worth it :)

yah, live life to the fullest!