I’m lying here in my tent between some big ancient rocks that used to be part of a reef million years ago. I’m in Geikie National Park just north of Fitzroy Crossing which is in the south part of the Kimberley’s in the north part of Western Australia. I am not really allowed to camp in the NP, that’s why I found this odd spot away from the car park and tourist information.
Just had my dinner, baked beans and 2 minutes noodles and some bread, not exactly a five star meal but at least it fills me up and it’s really cheap. Yesterday I got a free nice meal from some holiday makers from Perth and they fed me some cereals and milk this morning which is a nice change from the boring peanut butter jelly sandwiches I usually eat (and I don’t even like peanut butter! but its cheap and contains a lot of energy and proteins). And the night before I had some sausages with Luke (will tell ya more later) so I am getting kind of a mixed diet which is good.
I’m really starting to get good at getting freebies, but I do think I give something in return to people. They all find it very interesting when I tell them about Sweden, my journey through Australia and all the things I’ve learnt about the country that they had no idea about.
My adventure is approaching its end though, it’s still a long way to go (think about 30hours nonstop driving at least the way I’m planning to take) and there is a few things I’m still planning to see, but I'm hoping to be back in Perth in about 2-3 weeks, for good and for bad.
I do miss having friends around and a place to call home (my backpack is my home!) but I will also miss being on the road meeting so many interesting people and seeing all these places. I think if I had a partner to travel with I could be on the road for years just stopping every now and then at random places doing some work,
I have so many things planned to do when I get back to Perth! Sitting on the side of the road gives you so much time to think about your life and what I miss and what I want to do when I get back and so forth, but all these plans will come crashing down if I don’t get a extended visa which I haven’t even applied for yet (why do I always wait until the very last moment with everything?!). And if I don’t get it I’m in a tight spot, because I don’t have a return ticket and I can’t afford one either at the moment!
Oh well, it will solve itself in the end. Things always seem to do for me :)

I stayed two nights in Kununurra, getting on the piss the second night with some backpackers which was good fun but its something I shouldn’t do because of the money situation, but lucky me got 45$ in change back the next day at Coles when I gave the clerk 5$!
After Kununurra I caught a ride to Wyndham to the North and checked out the 5 rivers lookout and after that I got a ride back with the same guy to the turnoff going south from Kununurra seeing both a whirly (small tornado) and a bushfire up close on the way back, good fun!
Took me a while to get from the next spot despite I had two police officers about 50m away from me breathalyzing people so you would think people wouldn’t be scared of me. But just before 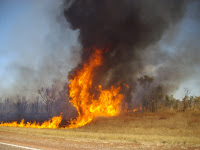 dusk a car full with aboriginals picked me up and drove me all the way to Warmun.
Next day I got picked up by the guy that had been sleeping in the tent next to me, Luke.
He was 25 years and from Coffs Harbour on the east coast and as Australian as you can get. Having the surfer look, driving a Ute, having a real strong Aussie accent and wearing a singlet with the Southern Cross on! But I got along with him really well and went to Bungle Bungle 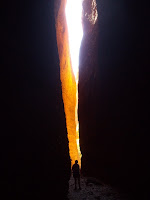 first with him for the rest of the day and most of the next then we slept one night in Old Halls Creek Lodge which has to be the weirdest place I’ve been to on this trip, it was like directly taken from some horror movie with a real creepy kid and all. The next day Luke dropped me off at the Wolfe Creek turnoff, hope to catch up with him again in Perth if he eventually gets there.
The Bungle Bungles or Purnunulu National Park wasn’t discovered by the public until the 80s, it consist 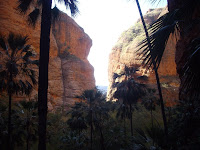 of these striped bee hive looking cliffs stretching 200m into the air and a couple of amazing gorges. It’s another really amazing place that everyone traveling around Australia really should visit, its also one of those places that its just impossible to get a photo that shows the majesty of the whole place.
Next I went to Wolfe Creek Meteorite Crater (watch the movie Wolf Creek if you haven’t, an Aussie horror movie). 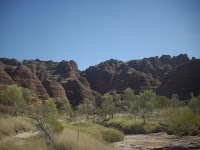 The Crater is 800m wide and is the second biggest in the world (The one in Arizona is bigger, wanted to go there when I was in the neighborhood but it isn’t always easy traveling with other people..), it got formed 300 000 years ago when a meteorite came crashing down, today its only 20 meters deep but apparently it was once 120m, Walking inside it almost feels like your in Jurrasic Park, just ancient with all the parrot noise echoing through the crater. The whole thing is surrounded by the start of Tanami desert, 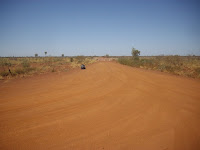 just flat landscape going on forever with very few trees and lots of razor sharp Spinifex grass. It was way easier then I expected to both get in and out of there considering its a 140km dirt road and away from everything just to get there with very little traffic. But I arrived already early in the afternoon and a couple there squeezed me into their car and got me to the highway next day because they didn’t want to leave me in the middle of nowhere, some nice people out there!

From there it took me the rest of the day to get where I am now, Geikie Gorge, which is a gorge surrounded by the 350 million years old Devonian Reef walls.