This trip is really starting to get the best of me, yesterday I was walking around hungry and just tired in the whole body despite I had eaten properly and slept. I have run out of tape for my feet, my kitchen fuel is almost out and so is my toothpaste, but I wont be buying anything new. Same goes for the food, scrounging up all the leftovers I have in my bag and only buying the cheapest there is. Peasoup yesterday (7 SEK) and a can of beans in tomato sauce with the pasta leftovers later today (5 SEK). I know I will be home in a couple of days and I’m trying to break some kind of record in how little money I’ve spent, its really low this far. 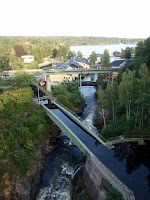 Left Orsa after finishing my last entry. Had a pretty good day of hitching and good a long ride with a dude that was teaching kite surfing on both water and snow, really renewed my interest to learn to kite surf. Eventually I ended up Håverud in Dalsland, Håverud has this aqueduct for boats, that’s built because the river was too harsh there, and then on top of the aqueduct is a railroad, and then a road bridge and also a walking bridge, so its kind of layer on layer. Walked around and had a look and then set up my tent by a parking lot. 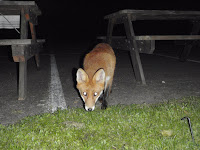 The following day it was raining a little in the morning and was very windy, but it soon cleared up and I had another great day of hitching with the sun shining on me, hitched west until I got to Tanumshede. On the way there a lady showed me where I could find plenty of chanterelles on her land so went in the and picked a big bag, sadly they got pretty roughly handled hanging on the back of my backpack (it fell on them twice, stupid bag!).
Tanum is another UNESCO World Heritage site. It is so because it has tons of rock carvings from the Bronze Age, over 500 different carved panels in a area of 45 square kilometres. 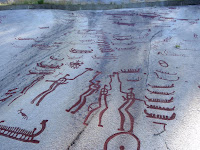 I walked around the heritage area a few hours and also had my computer and phone recharged some at the free museum. After that I hitched southwest towards the coast of Bohuslän, had a look in Hamburgsund and then got a ride with a young guy that I told was looking for a place to put up my tent for the night, so he drove me to this beautiful lake close to his home. So that evening I could go for a swim and clean myself up, first time in over a week. Then I had bacon, fried chanterelles and mashed potatoes for dinner, oh what a feast!

That night I had frost degrees, you can feel the autumn is approaching this far south to. I hitched back to the coast and by it down to Smögen which is one of the more famous places on the west coast. The Bohuslän coast is really rocky and consists of over 3000 islands; it is quite a beautiful place with a different look then the rest of Sweden. I walked around a nature reserve next to Smögen then through town and through the town of Kungshamn, seems like a really high class area to me. The west coast is also littered with these cosy little fishing villages that just get packed with tourists during the summer; luckily the summer season is over for the year. Next I hitched to Lysekil which is another town by the coast, a little bit bigger though and had a walk there. My feet are starting to hurt to so switched back to wearing flip-fops again, the weather was just awesome so was nice walking around in those and just a t-shirt.

From Lysekil I went east with a car ferry and into the countryside again, got dropped up on the middle of a freeway by a women that thought it was a good idea to hitchhike from there, it wasn’t! First of all it is against the law to stand there and then cars aren’t allowed to stop on the road and they all are driving really fast. But after about an hour the most unexpected vehicle stopped, a 19m long Norwegian truck. (Didn’t even bother try to hitchhike with trucks there because there is just no way they can stop on the side of a freeway, or that’s what I thought!).
Rode with him a bit southeast and then helped him some with his computer and he rewarded me with a beer and some chips, yummy! Then I set up my tent behind a bush next to McDonalds in Vårgårda. That’s where I am right now, preparing to leave for the day.