Leaving Vårgårda I had to backtrack some, found out that I forgot about Halleberg which I was planning to check out also. But quickly got a few rides and a lady buying me a hamburger meal because she felt sorry for me being hungry.
Halleberg and Hunneberg is supposed to be one of northern Europes elk richest areas, it’s also the King of Sweden’s hunting ground. Walked around there for about 3 hours but as usual I didn’t see a single animal, did get a nice view of Vänern, 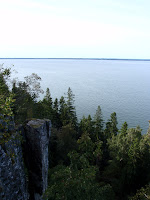 Swedens biggest lake, from the hill though. From there I hitched back some again and further east. Spent the night by a petrol station in Götene, talked to some police officers that thought I was up to no good and then went into the petrol station just before they closed and got myself two free hot dogs!
Next day I hitched to Kinnekulle, a hill/mountain covered in a bunch of nature reserves. Don’t know why I really wanted to go here but if one is into the Arn books (which I haven’t read myself) 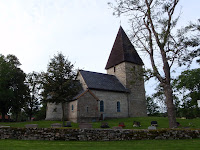 it is probably a good area to visit. Did some hiking and checked out the lookout tower, the view was quite foggy but on a good day you are supposed to be able to see 63 different churches from up there despite almost half the view consists of Vänern.
I hitched down from Kinnekulle and continued further east, had a guy give me a wine bottle out the blue when getting dropped in Skövde, and got picked up by 4 Somalis after him. Sadly I didn’t get a picture of these either, seems to be hard to get photos of Somalis! Next I arrived in Karlsborg which is home of the Karlsborg fortress, one of the biggest buildings in Europe 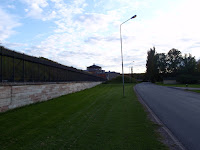 . They started to build it in 1819 to protect against the Russians but didn’t finished it until 90 years later and by then it was obsolete and there was no longer a threat from the Russians. As with most other places the tours and museum had closed for the season, so couldn’t see much and its hard to get a picture of a building that has a circumference of about 5 kilometers.
After walking around some in Karlsborg I hitched to the town to Hjo and set up my tent for the night next to another petrol station and pizza place (not the smartest of ideas on a Saturday night) and once again I got hot dogs for free! I make such a great bum. 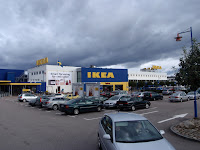 After that I wasn’t really planning to see anything else, and I figured I could time it quite perfectly and get home on day 50. So I hitched south.
The last few days haven’t seen any to exciting things, but on the other hand I met some really great people while hitching. Sadly it would fill way too many pages to write about them all in this blog.
On the way south I did a quick side trip to get a picture of the greatest thing to ever come out of Sweden, the worlds first IKEA!
Then I kept on going south into Skåne and set up the tent for the night just north of Degeberga. 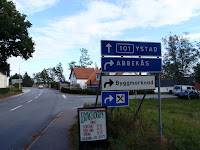 The next morning I got up real early just to get home fast just to have to wait 4 hours before the first car picked me up! I keep on preaching to people that you can never be on a hurry when hitching or have to be somewhere by a certain time, and of course I broke my own rule on the very last day. But eventually I did get a few a more rides until I got to Skurup where I got interviewed by the local newspaper. Then I hitched last 10 kilometers home. And the very last ride to pick me up on this trip when having about 3 km left was my own dad on his way home from work :D
So I came home yesterday, have been unpacking my stuff and eating a lot, but the hunger doesn’t cease and I think I will grab myself another sandwich right now.
Give it another 2-3 days and I will make a final entry for this journey with statistics and my thoughts, future plans and etc.