The other night my computer didn’t shut down properly so the battery got drained, but now I have been able to charge it again so I can make a new entry,
As I mentioned in my first entry and up in the right corner I am trying to do this trip on a extreme budget, haven’t mentioned before how much I’ve spent 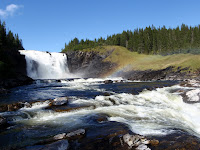 yet and I still wont, I will be done with this trip in about 7-10 days so will write it all then, can just say that its going very well this far, way over even my own expectations!
Also want to clarify one thing here:
I never ask anyone for anything! I do not ask them to people to give me a ride, I just stand on the side of the road with my 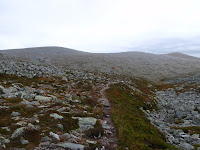 thumb in the air, always. I also never ask anyone for food or a place to stay or anything similar, I just tell them about myself and what I am doing (usually don’t mention what other people has done for me unless they ask) and if they decide to do anything for me it is their own idea and their own free will, just got to love seeing that there is people in the world that actually want to help out other people. 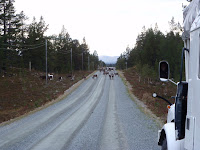 The next day leaving Anders I decided that I would take a short trip to the west to see Tännforsen, one of Sweden’s biggest waterfalls, before I kept on going south. It was pretty easy getting there and I did my first ride with a campervan on this trip when leaving the waterfalls. The waterfalls were as always beautiful, but as with all other waterfalls the flow is almost at its lowest at this time of year. I would love to see them all during the spring flood.
That day the hitching went pretty well and got 8 different rides before I set up my tent just next to a golf course, a nice old lady took quite a detour to get me there. 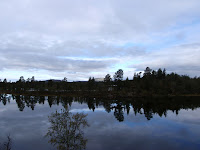 After quite a cold night the rain came, so took a while to drag myself out of the sleeping bag but I eventually did and got a ride with a lady that bought some lunch for me at Statoil, then I hitched into Sånfjället National Park with a Jaguar. Sånfjället is one of nine national parks that got founded in 1909, Europe’s oldest national parks.
Had a chat with a very enthusiastic ranger then started hiking with high hopes to maybe see a bear, but 5 minutes after leaving it started raining on me and was really foggy, it kept doing this for the next 2,5 hours I hiked. Set up my tent in a valley between two mountain tops inside a badly built wind shelter. It was so cold in the air, windy and raining with a sight of about 15-20 meters. Tried to dry my stuff (my feet and legs were soaking wet, so boots, socks, pants and shirt were also very wet) but nothing could dry because I was up in the low flying clouds, so the humidity was very high. 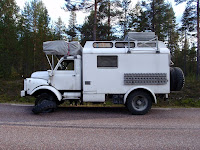 This was the first time on this trip I actually feared for my own health, had some warm soup and crawled into my sleeping back and had a very cold night.
The next morning the weather was the same but I stayed in my tent until lunch and it eventually cleared up, so put on my wet boots and pants and hiked out some 10km to the other side of the national park. And of course I didn’t see a single animal, but would like to go back some day when the weather is better and give it a second try.
I hitched until I got to the town of Tännäs which has Sweden’s highest located church

and some other stuff, and there this German couple Sigi and Carmen picked me up. It is unusual Germans pick me up and especially when they drive campervans, but it didn’t stop this couple which was driving a really cool old campervan. They were heading into Rogens Nature Reserve which I had read about before, but was planning to skip because it’s hard to get to while hitching. But I went with them in there and set up my tent next to their car, and they fed me a nice two course meal by the open fire. It was frost degrees that night so it was a very cold night.
The next morning we started with a 21 km hike, not my favourite thing to do in the mornings but at least I left my backpack in their car and it felt really good once we were finished.
Rogen nature reserve is this huge maze of lakes and boulder ridges. We did see quite a lot of reindeer during the walk (Sigi and Carmen also had two dogs with them which often smelled the reindeer before they detected us).
After the hike we drove further south, it so happened to be they were heading to the same national park that I was so I kept going with them. Was a very slow car but I half slept in the back most of the time.
Alas I got to see more Elks! Just as we passed the border into Dalarna there were 3 of them grazing some 100 meters away from the road, sadly the zoom on my new camera is no good, so couldn’t get a good picture. 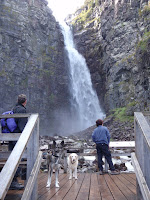 We set up camp that night a couple of kilometres from the national park and once again I got free dinner. Had another freezing frost night and the next day we drove into Fulufjället National Park. Fulufjället is one of the newest national parks in Sweden and it Sweden’s southernmost mountain chain. It contains Swedens highest waterfall (Njupeskär, 93 metres high) and also the world oldest trees (cloned themselves) being almost 10 000 years old. It is also given the status of a PAN park.
We did a shorter hike here to the top of the falls and around, and one thing that hit me while walking here is how other tourists are dressed, 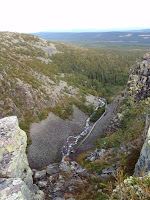 I’ve noticed the same in other places. They all carry really big expensive cameras and the most modern and expensive in hiking gear, then the majority just go back and stay in their campervans or hotels without spending a night in the parks. Obviously people do have way too much money.
After the hike I rode with Carmen and Sigi the rest of the day until we got to Orsa, we did see another Elk also during the ride. In Orsa they went into a caravan park and I said my goodbyes and walked some until I found a good spot to set up my tent by the Orsa Lake in town.
So that’s where I am sitting now, just going to finish this entry then Ill try to cover a longer distance going south today.

Edit: for anyone who hasn’t noticed it, on the Google map page down in the left corner you can switch pages. Apparently Google doesn’t allow more then 25 markers on each page. Also if it doesn’t show the numbers 1-4 down there, try pressing F5.