I’m starting to wonder if I’m 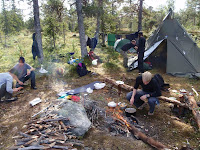 carrying some anti-animal deodorant or something, because it just seems impossible to see any of the ones I want to see! Seen one Elk for about 2 seconds this far, and I mean it’s because of them so many Germans come here. I’ve been all around Sweden and lived my whole life here and still only passed one, 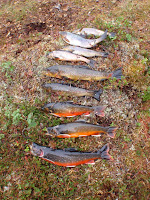 oh well. It’s not over yet.
So the next day we got up early and drove about 130km to the north following just a dirt road, stopped by a small stream and hiked up a couple of kilometres until we got to this idyllic lake and set up base camp there.
It was me, Anders and five of his friends and we all slept in a big tent with an open fire, so now just about everything smells of smoke.
We did some fishing in the lake and went looking for more lakes to try our luck in during the days, turned out to be a really good first 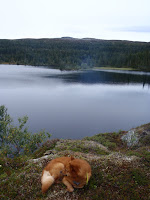 day catching 9 fish (Trouts and Arctic Chars) that we cooked for lunch the next day and we threw back several fishes that was a bit too small to keep. The other 2 days wasn’t as good though with not a single fish worth keeping!
We also walked across and picked lots of chanterelles, some porcini and as always tons of blueberries and a few cloudberries too.
I had 3 very enjoyable days up there exploring and fishing, 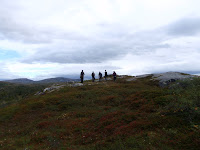 my boots has started breaking a little bit more and smells so much of smoke now which isn’t too good. We were also very lucky with the weather, was supposed to rain most of the time but only rained during Tuesday evening and night.
I slept another night and Anders place 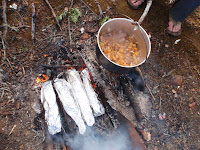 so I could wash my clothes and today I’m off to Sånfjället.
Sånfjället is supposedly the most important bear habitat in Scandinavia, so if I’m lucky I'll see one or maybe some Elk because there is supposed to be a large population there also.
I am really hoping to get to see at least one of the four big predators we have here in Sweden, Bear, Wolf, Lynx and Wolverine, although they are quite rare and very hard to spot.