Getting out of Svolvaer was pretty easy and the first car to pick me up had once picked up Isabelle also. Another two rides and I got picked up by this awesome Norwegian couple Tommy and Nadine, almost immediately after I got into the car they asked me 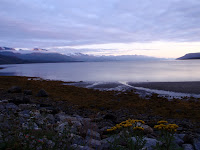 if I could drive (doesn’t happen very often). We drove to their home and had some sandwiches and after chilling for a while they decided that they should go to Abisko where I was heading because Tommy knew the owner of one of the hostels. So once again I drove, crossing the border into Sweden and arriving at the hostel where a bunch of guys and one of the owners was having a few beers in one of the best Saunas I’ve been in (ok, being from Skåne that doesn’t say too much, but still) so we joined them 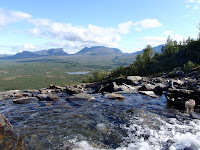 there for the rest of the evening. The next day Tommy and Nadine went home again and I asked the owner Thomas if I could stay at the hostel another night which was ok (thanks Thomas, Tommy and Nadine!). I was originally planning to hike 110 kilometres down Kungsleden which is supposed to be one of the best hiking trails in the world,

but being a bit exhausted from being on the road for a month I decided to just hike up onto a mountain in the Abisko National Park that day to enjoy the amazing view. The abisko.net hostel also offers dog sledding tours during the winter and they have 55 Siberian huskies that I the following day got to help out feeding, would like to come back here one day during the winter to try dog sledding. I hitched a ride to Kiruna next.

Kiruna once used to be the world’s largest

city by area before the definition of a city got redefined. It also has the world largest underground mine digging over 1000 meters deep and exporting tons and tons of iron pellets every day. They are even planning to move half the city of just because the mine is expanding. This was also the first time that I really felt that not having any money to spend hurt me, because I really wanted to go on a tour into the mine. Oh well, some other time I hope. It was starting to get dark so I got the great idea 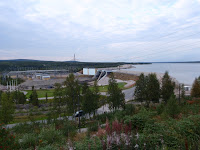 to walk up the ski hill just outside the city so I would get a great view of the mine in the morning, only to wake up with a view range of about 10 meters because of the fog. I gave up after waiting a couple of hours and started hitching south.

In Kiruna all the mountain birches and trees had already turned orange but as I was heading southwards the trees started getting more yellow and eventually turning almost fully green. If you look at a map you notice being this far north is about the same level as Greenland, northern Siberia and the most northern . But because of the we do have a much milder climate here. I hitched through Gällivare which is another city that exists just because of the huge mines and further south to the which is within the UNESCO world herigate

area of Laponia, the last European wilderness. Muddus also lies within the Jokkmokk municipality which is about half the size of the Netherlands and has a population of about 5000 people, the Netherlands has about 16 500 000.

is a pretty large area covered in primeval forests, large bogs and plenty of ravines. 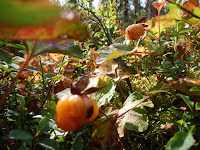 It’s supposed to have a large population of animals but of course I didn’t see a single one first hiking in 7 kilometres to a cabin and another 20 km the next day. But at least I found me some cloudberries which I never seen in the wild before, and also saw two big waterfalls. From the parking lot I got picked up by the same guy that drove me in there the day before (10km of the main road on a small dirt road leading nowhere else but the National Park). 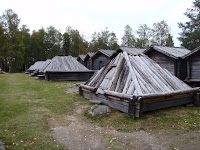 I hitched south through Arvidsjaur where I had a look at the Saami church village. Then another 30km and the rain started pissing down on me while standing by the side of the road, but I saw a sign about a bird watching tower which turned out to be quite big so it saved me from the rain that night. The next day it 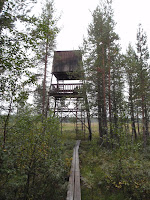 still rained but I pretty fast got picked up and got my longest ride this far, all the way to Östersund and there the driver bought me a McDonalds meal for lunch :D After that I hitched west to the ski resort of Åre where my childhood friend Anders lives. Today we have just been chilling and tomorrow I will head out into the mountains with Anders and a few friends of his and stay there until Wednesday, sadly the weather forecast isn’t very promising.

Edit: *sigh* another stressed out entry, always wait until the last second to write them (just finished it and we are leaving in 10 minutes) so I don't have the time to edit and re-read it properly before posting it.

Hi
I am a peruvian traveler and also hitchhiked like you but in Latinamerica...last year I was in Scandinavia and enjoyed it reading what you write makes me remember my adventures in those countries...I will be following your adventures in this trip and the others too.
A big hug from Peru....EDGARDO