Being camped out just outside Orrefors I walked to 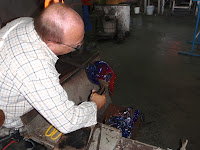 Orrefors Glassworks which is one of the glassworks within the Kingdom of Crystal in Småland. In total there are 14 active glassworks (have been over 100) with the two most famous being Orrefors and Kosta Boda. They both mass-produce glass and also blow it like they did in the old days and you can watch them do it.
After walking around there looking at all kinds 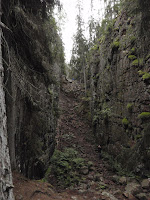 of crystal and glasses I headed out on the road again and quite quickly hitched to Växjö where I used to study a few years ago.
So that night I could finally get a proper shower and do laundry at a friends place, Christoffer. Also had a few beers in the evening meeting some other people I knew which was nice.
Leaving quite late the next day I hitched up to a nature reserve called Skurugata just northeast of Eksjö. It’s called this because of this 800m long gorge with walls 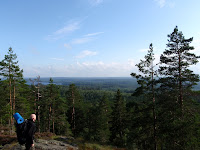 on each side being up to 35 meters high. At the bottom of the gorge it can be 20 degrees colder then the temperature at the top and it actually have arctic plants down there. It’s a quite impressive place and the scientists aren’t quite sure how it has come to be. Being at the bottom of the gorge it suddenly started to piss down on me and carrying a 25kilo backpack didn’t make it easier to get out so got quite wet and muddy. Then I walked to the top of the reserve, Skuruhatt which is one of the highest points in Småland with amazing views of the pine forest and lakes. 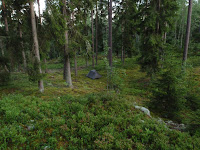 I decided to set up camp just 50m of the path (not really allowed to put up tents here) on the moss surrounded by blueberries and lingonberries! First time in my life I’ve seen raw and wild lingonberries, they are not quite ripe though and not that tasty to eat raw. Today I woke up late and was just about to pack my things when it started raining, so I decided to stay in the tent until it stopped which was a few hours 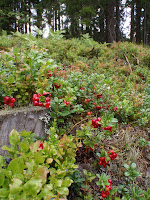 later. Thought I might as well stay another night here then and took another walk through the gorge, and of course it rained on me again! It’s been so cold here this evening too and really windy, it’s hard to believe it’s in the middle of the summer here.
And on yeah, stupid me forgot my favourite cap in a car yesterday, weird thing is though that they gave me 100SEK out of nowhere telling me to buy food for it, then after realizing my cap was gone and pondering if I should try to find them to get it back a car stopped and asked if I needed a ride without me even hitching, so took that as a sign and got into the car which drove me all the way to Skurugata.