Forests, forests and forests (and mosquitoes!), Sweden is just covered with pine forests except in the far south where I’m from. It isn’t too exciting to drive through all these because you don’t see too much. But once you get a bit further north in the country (I’m not even halfway through yet) the forests starts mixing with lakes, rivers, mountains and fens which almost make the landscape magical riding through. It also makes you daydreaming about having your own little cottage by a lake here somewhere. 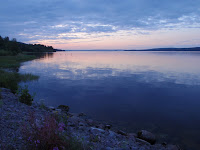 The next two days I started hitching pretty late but still covered the distances I wanted to. First I went to Falun which has the Falun copper mine, another UNESCO World Heritage Site. It is one because they have mined for copper here for over 1000 years, they have found that they were getting copper from here already in the 8th century and its been a major copper mine all until 1992 when it closed. During the 17th century it was the biggest workplace in Europe and supplied the western world with two thirds of all it copper needs exporting to countries all over Europe. It was this mine that supported the Swedish war effort and made Sweden a major player during that age. Back then it didn’t grow any trees for 5 kilometres around the mine and no plants at all for 2,5 km because of all the toxic smoke and Carl von Linné called it hell on earth when he once visited it.
Also both Falu Red which just about all wooden houses on the countryside in Sweden are painted with and Falukorv has come to be just because of this mine.
After Falun I hitched to Leksand and set up my tent there just by the southeast part of lake Siljan, today I went to a lookout tower of the lake which is quite impressive, this lake and couple of lakes around it is actually a huge meteor crater, the biggest one in Europe. 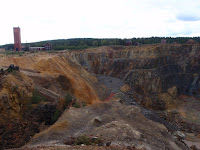 After that I started hitching north to cover a greater distance and I am now in Sveg in my tent, it’s raining currently which I really don’t like.
Rode with an old wise man today that walked several thousand kilometres through Sweden, and actually slept in Abbekås, the town where I’m from. We discussed why people don’t pick up hitchhikers. I usually tell people that it’s because in today’s society people are either too busy or too afraid to let a stranger into their car. His theory was that people see no gain, just risk in picking up a hitcher. Which I think there is some truth behind and the sad reality of today. If people can’t gain something from doing something, they don’t do it, not even helping a fellow human being out. So most people that do pick you up are the people that once themselves stood there on the side of the road trying to get a ride because they know what you are going through.