The further away from the cities and the more desolate it gets, the more I like it the general rule seems to be. Was the same thing while hitching in Australia, loved it the most when I was alone in the middle of the outback. 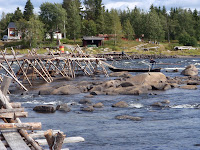 I left Nils the next morning and had a real good day of hitching, came to Haparanda which is on the border to Finland and went north from there following the Torneå river which seperates Sweden from Finland. Did a shorter stop by Kukkolaforsen and watched the fishermen catch whitefish (Sik) using just rakes! Now that’s an unusual way of fishing and apparently they have been doing it here for a very long time. 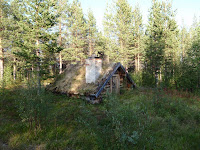 I continued further north and started noticing how far away I actually am now, people are getting a lot harder to understand and I had to speak real slowly and listen closely to have a conversation. An older fella gave me a piece of dried reindeer meat after telling him I never tasted it. I would be buying some myself it wasn’t so darn expensive because it’s full of proteins and weighs very little. That night I had my first frost night, it was cold. The next day the hitching was the complete opposite and in 12 hours hitching 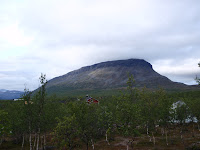 I got about 50km, of which I walked about ten. The last couple that dropped me off invited me in for tea and told me about a small free unmarked cabin some 8 km up the road. I walked up to the cabin with a total of 4 cars passing me in 90 minutes without anyone picking me up. So I decided to spend the night there having the best sleep yet on this trip, just a little too smoky after my not too good fire starting skills. 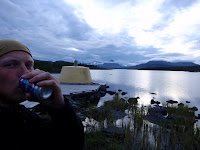 I should have stayed on the Finnish side instead because the road is much better and has a lot more traffic on it compared to the one car every 20-30 minutes on the Swedish side, but eventually I did get a ride next to to Karesuando, Sweden’s most northern town.
I have started to see a 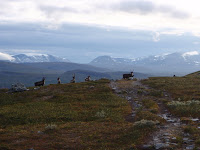 lot of reindeer now also, it's still late summer so they should be up in the mountains but there are always a few stray reindeers down in the forests and those are the ones I’ve been seeing by the side and on the road while hitching.
From Karesuando I walked over to Finland and hitched further north until I got to the town of Kilpisjärvi. Coming into the town you get an awesome view of Saana, the holy mountain of the Samis (the native people in northern Scandinavia). 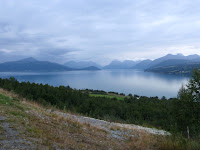 Sadly I was in the back of a car so didn’t get any pictures until I was in town. From the town I hiked west 11km through Finland’s oldest nature park Malla, over some mountains with real beautiful nature and lots of reindeers walking around until I came to Treriksröset. Treriksröset is the spot where Sweden, Finland and Norway meet so you can stand in all three countries at the same time.
Once getting there, which was the main goal of this whole trip I celebrated with a beer that the last guy, a Norwegian on his way to a Sami festival, 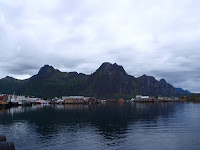 had given me.
I slept in a free cabin that night sharing it with 3 Finnish guys. The next day I hiked back the 11km and decided not to hike up on Saana because the weather was quite bad and walked into Norway instead and hitched further north then west.
This is my first time ever in Norway and I start to understand why some people I met claims it’s the most beautiful country in the world. 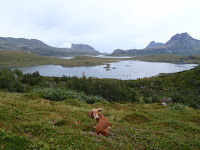 The fjords are just amazing and while I was heading west and finally got to Lofoten it just got better, slept on a hill by a bridge in my tent that night and continued out on Lofoten the next day to the town of Svolvaer.
I also noticed that hitching in Norway is a lot easier then hitching in Sweden, but I guess it's partly because the E6 road is basically the only road going through the country so everyone has to be on it. 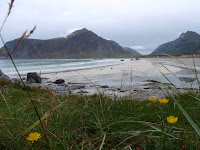 In Svolvaer my friend Isabelle lives and works, she is a Swedish girl but I can understand why she has moved to Svolvaer, the beautiful nature and of the way better salaries then Sweden makes it worth it. I know Isabelle because she is also a hitcher, one of the very few, so it was real fun getting to chat to someone that knows what it’s all about :)
Isabelle works at a hotel so I got me some real breakfasts twice and could wash and have a shower. The first day I came to Svolvaer there was also a food festival so I got to try me some whale meat, both raw and cooked. I also tried dried fish and goat cheese and some other food. 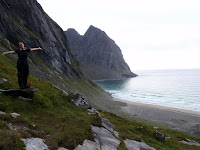 The next day we went with a friend of Isabelle further west on Lofoten and did some hiking to a really beautiful beach, and while hiking back across the mountain we could see whales breaching the water out in the ocean so the visit in Lofoten has been an awesome experience, I am thinking about coming back here next year to do some season work.
And oh, Isabelle says she will challenge 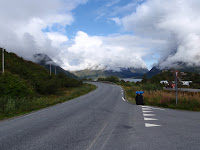 me next year and do a hitching trip for even less money a day then I do on this trip. I don’t think will be too hard for her because she got two very important things that I’m missing, boobs! Being a small blue-eyed cute girl is a lot easier getting things from people then being a 193cm long unshaved guy. I just wonder if she has the discipline to never spend any money on like an ice cream or a souvenirs or something =P
Today I am heading east, back into Sweden!