Standing on the side of the road hour after hour really does give you time to think about things, the past, the present and the future. You plan future trips, think about what you will do when you get home, remember good old days and come up with all kind of ideas; it’s just too bad I almost never write anything down.
The next morning the sun was shining again so I packed my tent when it was dry and got going. Had 3 days of rather bad hitching, especially around the Sollefteå region, first I stood 2 hours just outside the town then 3 hours trying to get out of it, sure I stood 4,5 hours in a place some 30 minutes outside Sveg but that was a really lousy place to stand while the Sollefteå spots were as good as it possible can get when hitching, and still so many cars just drove by without stopping. Really makes you wonder what goes through people’s heads when they see me on the side.
Had one of the oddest rides ever on the first day (3rd car in the picture) and also got a ride with a bus which is really unusual. On the second and third day I got my first two rides with trucks. 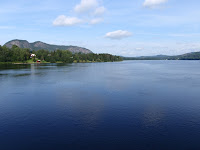 So I didn’t get as far as I expected the first day but on the following day I got to my next goal, the Dead Falls. The Dead Falls was known as the Great Falls before 1796, it was this huge waterfall along the river Indalsälven. They wanted to do logging on the river so they could get the timber to the coast but it was just impossible with the falls because is smashed the wood to pieces. So they came up with the great idea to re-route a small stream via the lake west of the falls around the falls into the river again, the work started out pretty well but on the 6th of June 1796 the spring flood came and broke through the locks of the stream which ended in disaster. The 25 kilometres long lake was emptied in the less then 4 hours, 1 000 000 000 cubic metres of water washed down the river taking houses and sawmills and farms with it and the Great Falls went silent forever and became known as the Dead Falls after that. And now you can walk around in the area where the falls once were. 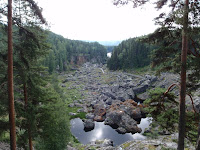 The weather was pretty bad with lots of rain that day and also yesterday, but luckily I succeeded to get under a roof every time it started pissing down.
My next goal was this Thai Pavilion in the middle of nowhere. The last ride there a guy named Reine picked me up. I told my usual story about what I was doing and he invited me to his place, he had some houses just next to the Pavilion. So I did get a private guiding of the place, the Pavilion is the only one of its kind outside Thailand. It was built in 1997 to commemorate the 1897 visit of King Chulalongkorn of Thailand to the town. It’s pretty bizarre seeing a place like this in the middle of the Swedish forest, kind of the last thing you would expect. 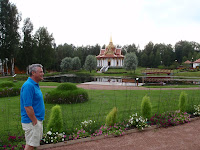 Next I had a shower and washed my clothes and had a proper dinner with Reine and his daughter and then I had a proper sleep in the sofa. After not being able to have a shower in over a week and not having any clean clothes to wear this was like a blessing from above, made me feel like a completely new man. Also as I mentioned in an earlier post I just love to see that we do have these kind of people also in Sweden.
Reine is by the way also a musician in the band Allgott & Villgott, haven’t heard of them myself before but think they are well known at least on the west coast.
So after another day of dodging the rain I put up my tent just next to Skuluberget by the High Coast, another UNESCO World Heritage area (Sweden has 14 in total, a few too many if you ask me). So once I had my breakfast (grows raspberries and blueberries where my tent is setup) I’ll walk up the mountain and have a look.