Sweden is just packed with ancient monuments and grave mounds, medieval churches and castles and old mine shafts and industrial equipment. There seems to be something worth looking at just around every corner. Think it’s like this with most countries though and you just have to make a selection to see a few things if you are ever going to make it home again. 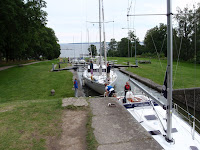 The next morning I got a quick ride to Berg´s Slussar which is a part of Göta Canal, a canal constructed in the 19th century which made it possible to cross Sweden by boat. There are 7 locks at Berg where I went and they lift the boats a total of 18.8 meters. Really interesting to see how the locks work. 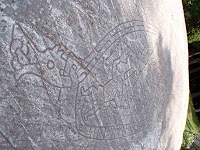 After that I tried to hitch north via a not very active road so it took me quite some time to get anywhere and when the sun started to set and I was walking down the road to find a place to put up my tent the last car passing by picked me up and drove me at least some distance. 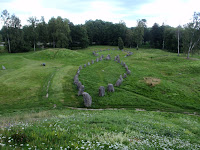 Camped out just outside Statoil (a petrol station) and they were closing for the day just when I was setting up my tent so I walked over and asked if they had any food they were throwing away for the day, I ended up with 4 donuts and 3 danishes! I’m such a bum :D
The following day I hitched to the Sigurdristning northeast of Eskiltuna,

it’s a famous stone carving made during the Viking age and ordered by a woman reciting the legend of Sigurd, which is quite alike the Nibelungen story actually. After that I hitched around the lake Mälaren (with some awesome view of Strängnäs from a bridge) to Anundshögen just east of Västerås. I was quite lucky because this guy Tobias drove me there even though it was 10km of his way home and despite he was in a hurry; actually the same thing happened when going to the Sigurdristning with another guy. 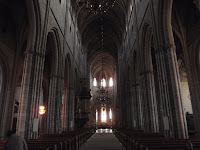 Anungshögen is Sweden’s largest grave mound and they think it was created sometime between the 3rd to the 6th century. They usually burned the person (most likely a king when it’s this big) with all the belongings the person (both women and men) was supposed to bring into the afterlife, and then they covered the remains with these huge piles of dirt.
In the Anundshög area there is several other grave mounds, 5 ship settings that were used during the Viking age for unknown reasons and a big cryptic rune stone, so it has been quite an important meeting place in the past. 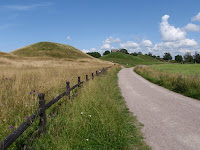 After walking around the area for a few hours I got a call from Tobias which had been away at a birthday party and he asked if I wanted to come and have a shower and sleep at their place, so I started walking there until he picked me up. So that night I had a few beers and a shower and slept in a blue bus, it just makes me so happy to see we have all these kind people I have met the last couple of days also in Sweden! (wish I could mention everyone by name here but the entries would just be way to long then , but at least all of you are in the picture of people that pick me up and I’m very grateful) 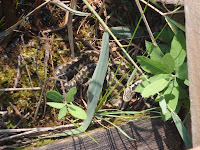 In the morning Tobias partner Anki (whom he is getting married to on Saturday) drove me into town and we went to have her car checked. Then I hitched northeast to Uppsala which is the fourth largest city of Sweden (130 000 people living here, Sweden isn’t a very populated place!).
Uppsala has Scandinavia’s oldest university founded in 1477; it also has the Uppsala Cathedral which is the biggest church in Scandinavia. Went for a guided tour in the Cathedral and I was majorly impressed by the whole building, it's just so beautiful and big and has got so many old things in there, it's 118,7 meters long and 118,7 meters 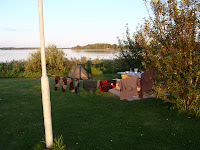 high. Construction began already 1287 but it took about 160 years to finish. From there I walked some 6km northeast of town to Old Uppsala which shows that the area has been a very important place for a very long time, Old Uppsala has the 3 king graves (3 huge grave mounds) and several other old monuments including the old Uppsala Cathedral. The mounds were made about 1500 years ago and they think they contain the bodies of 3 kings (hard to find out exactly because the corpses and their remains were burnt.)
Then I hitched north to this nature reserve Florarna, it’s a pretty unknown area of 50 square kilometres covered in forests and fens. Got a ride 10km into the nature reserve by this nice family which also gave me some food, then I started hiking some 5km through the reserve. Hiking through the forest was just horrible, felt like I was getting eaten alive by the mosquitoes! But on the Fens at least I got away from them and also saw my first European Adder, the only poisonous snake in Sweden. I was lucky and by the end of the hike I found some cottages that you can rent and one of them was unlocked, so I spent the night there away from all the horrible flying things outside!
Next day I had to hike about 9km out to get onto a road with some traffic and then I hitched west. Went pretty well until I got to Gävle where I was stuck for 4,5 hours, but on the plus side the guy that dropped me off there, Alex, gave me bread and cheese so I had some free lunch. But I finally got out of there too and got a ride to where I’m now, a rest stop just next to a beautiful lake, so yesterday I did some washing in the toilet and I just went for a morning swim a couple of minutes ago, so nice to get rid of all that sweat I have been accumulating the last 2 days from hiking.