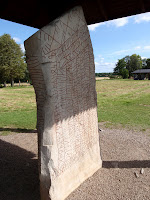 almost 10km before I did get picked up by a car getting a short ride into Eksjö. From there I hitched north on smaller and smaller roads until it was just a dirt road, but eventually I got a ride even on that road and got to Rökstenen in Rök, which is the longest runic inscription in the world.
Researcher still aren’t sure exactly what the stone says because it's full of poems and cryptic runes and from what I’ve heard they just came up with a new theory about it, but it was probably carved in the 9th century. 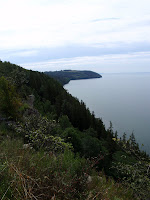 From the stone a couple turned around in their car and picked me up just because I had the same backpack as the guy driving (he was selling them). They were heading to the same place as me, Omberg. Omberget is a mountain covered in a protected forest (an ecopark) just next to Vättern which is Swedens second biggest lake. I hiked with the couple to a camp where we set up our tents, during the hike we realized that we actually knew each other/had met before! Me and this guy Björn did our military service together 9 years ago, he lives 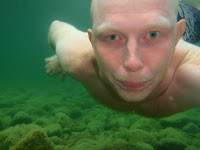 in Linköping which is closer to Stockholm and here they pick me up on a road that they never usually drive and that I never been on before, small world isn’t it? After setting up camp we went for a swim in Vättern and they barbequed some hotdogs and shared with me :D
Next day I had to walk a couple of kilometres before getting a ride but eventually got one and arrived in Vadstena which is one of the older cities in Sweden with a lot of history.

It has this huge Vadstena Castle which was built by Gutav Vasa in the 16th century. It also has the Vadstena Monastery that was founded by Saint Bridget of Sweden back in 1350. Walking around both the castle and the monastery is something everyone that visits Vadstena should do. After looking around Vadstena (also has some really old houses and streets) and stocking up on food I headed east until this kind of crappy rest stop where I am at now just by the E4. 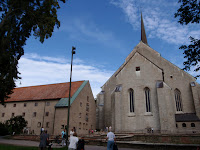 I have started to get blisters on both my feet and I can feel my hips aren’t used to the weight of the backpack. Also my enthusiasm is really low most of the time, but whenever there’s a dip it always comes straight up again with things like Björn and Anna happening. And there is no such thing as giving up! Just thought I would be a bit further up north by now but I still have plenty of time.

Note to self: stay away from the E4!