The view from Skuleberget was pretty awesome, I was also lucky because they have one guided tour up there each week and I just happened to time it perfectly.
As I mentioned in my previous entry The High Coast is another UNESCO World Heritage Area, it is so because it has the highest “rebound” in the world. 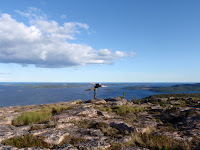 After the ice age 9600 years ago the land has risen 285 metres and keeps on rising almost a centimetre each year. So it has the world highest coastline. Walking on the top of Skuleberget which is 296 metres high they have marked where the coastline used to be and you can actually see on the surrounding mountains and area where the coastline once was because how the trees are growing and shingle fields being so high up. 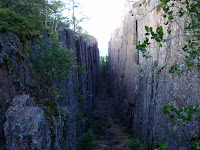 After hiking down the mountain and packing my tent I hitched to Skuleskogen National Park which is also in the High Coast area and hiked in some 5 kilometres. Walking up on a mountain I had the most beautiful views I have seen in Sweden so far, after that I hiked through a huge gorge (Slåttdalsskrevan) and then continued to this really idyllic place. It was a small cottage (free for everyone to use) next to a really quiet lake. The lake was 180 metres over the sea level despite the sea just being some 500 metres to the west. 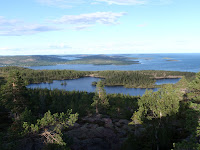 Made a fire here and talked to a couple that also camped out here that night. Drinking water I could take directly from the lake. There were also black-throated divers on the lake having this real eerie wail which just added to the whole experience. Have to say Skuleskogen is by far my favourite place in Sweden so far, the views and tranquillity of the place just made it all so magical. 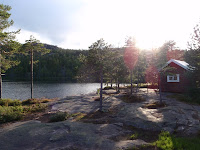 Next morning I hiked out of the national park on the north side (started on the south side) and then started hitching north towards Luleå, it’s some 400km but I was starting to get in a hurry to get north. So 8 rides later I showed up at my friend Nils place in Luleå.
I slept the night there and the next day suddenly my girlfriend showed up surprising me! (She lives down in Skåne).
This all put me in a difficult situation, first I couldn’t keep on going because she was there and second it wouldn’t be very fair to leech on Nils and Veronica for 3 days. 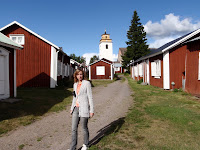 So after much thinking I’ve come up with the only way it can be done is pretending as these 3 days haven’t existed on this trip, so I won’t include them in the budget (and of course I haven’t bought any food to bring with me during these days). It almost feels like cheating but not much I can do about it.
This morning Veronica caught a flight home again and I am preparing to leave myself, can already feel its starting to get colder out though and the upcoming nights it’s supposed to be about 1-2 degrees Celsius where I am going, but my next goal is the very top of Sweden!
I do have to mention that I and Veronica went to the Church Village of Gammelstad which is another World Heritage site in the city of Luleå. It’s the largest and best preserved church village in the world. A Church Village is a place in northern Scandinavia that were used by people living on the countryside on Sundays and big holidays, they went to the village and stayed the night there in their own little house because it was to far to travel in one day. In total there is 424 wooden houses surrounding the 15th century stone church.
So big thanks to Nils for letting me stay here and Veronica for surprising me, now I’m just going to have some breakfast and shower and I’m off.

Edit: It took me a bit longer then expected to do the laundry and get ready yesterday so decided to stay another night, which also gave me time to visit Marie, a friend from Australia that lives in Luleå and gossip about old memories which was fun.
But today im off!